Raymond Hall is very privileged to count as a friend a remarkable man called Reg Ward. As the first Chief Executive of the London Dockland’s Devleopment Corporation, it was Reg who conceived the Docklands Light Railway as part of an extra-ordinary and timely vision for the east side of London. He called it a ‘water city’. The consequence is Canary Wharf as the centre piece of the beginning of a transformation of a vast area that was once the biggest trading port the world had ever known.

Reg’s vision and strategic thinking did not stop there. His ‘water city’ would work with the sea as a partner by being an energy generator and living tidal defence for London. It would unite the Greenwich Peninsular with the Royal Docks, Dartford and Gravesham with Tilbury – and even the coast of Kent with that of Essex. The announcement of the viability of a Thames estuary airport has, no doubt, been influenced by Reg’s thinking. Raymond Hall and an expert on the Thames and her estuary – Peter Kent – established a company with Reg called ‘London Water City Ltd’ to embody and develop his thinking: the proposals shown were prepared in that context 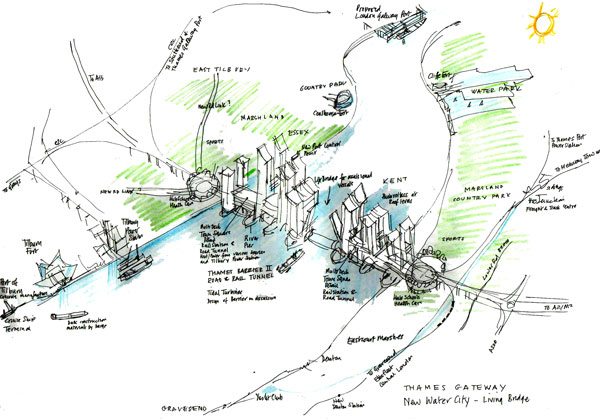