The self-given brief was to establish a deliverable solution to a global and national issue as an exemplar applicable to many comparable situations. Our Earth is in trouble. Both ice caps are melting, releasing vast quantities of water into our oceans. Sea levels are rising, as more rain falls on land with floods following.

In 1953, London was deluged with a serious loss of life. The resultant Thames Barrier has a design life up to 2030, which is ‘tomorrow’ in development terms. Climate change means a repeat could be devastating, undermining global confidence. Many cities are like London, lacking river crossings. When standing on Tower Bridge looking west, there are 27 bridges before reaching the M25. When looking east, the first bridge is at the M25. The public sector cannot deliver conventional bridges at the speed required. A private sector-led solution is needed.

People and Places International has established a delivery company and a line of funding to build nine new bridges following the precedent of the first London Bridge.

Each bridge would be inhabited, with flats, hotels, restaurants and even hospitals above and cinemas and other leisure facility in the volumes below. The cascade of land value would then substantially fund a variety of bridge types in a proposed partnership with the primary landowner, the Port of London Authority. Each would be designed to be energy self-generating using photovoltaics and solar absorption in the construction fabric. Ground, air, water source and tidal energy would be extracted. Each bridge would sequentially hold back water from inland and from the sea and do so in a socially unifying and economically dynamic way.

A ‘Utilities’ Spine’ set in the river bed would connect each bridge as a ‘Rib’, carrying waste for recycling, as well as gas, water, electricity and telecommunications. Each bridge would thereby be a service hub for adjacent developments, minimizing construction disruption to existing communities.

The whole system could be prefabricated off-site on the Clyde or Tyne and floated into place. The first inhabited bridge could be at the mouth of the Thames as the first line of sea defence, thereby joining the two arms of Cross Rail resulting in a ‘Cross Rail Circle Line’ servicing the expansion of London eastward. A spur would access a new trade based airport off the Isle of Sheppey as a large floating pontoon, with the first bridge as its main terminal.

Imperial College, Greenwich University, the UEL, UCL, the Architectural Association and Oxford University have been involved in the discussion. Siemens, TATA Energy and Tecnalia of Spain are potential research partners.

The goal is a knowledge and skill base, with many jobs following in a marketplace that is global due to climate change.  The ‘Spine’ and ‘Ribs’ can extend inland to heartland tributary towns, with each having new green energy generating inhabited bridges. Many comparable situations around the UK and abroad could benefit when harnessing our nation’s multi-ethnic global network. This total approach seeks to address serious issues and unlock a positive new future for us all. 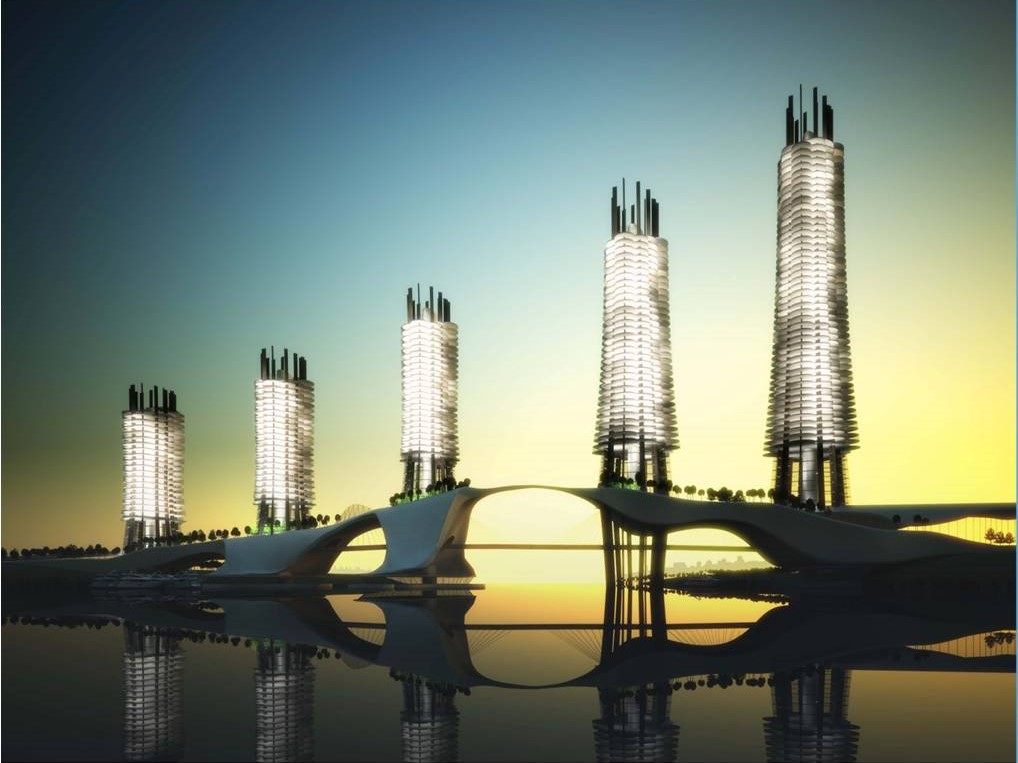 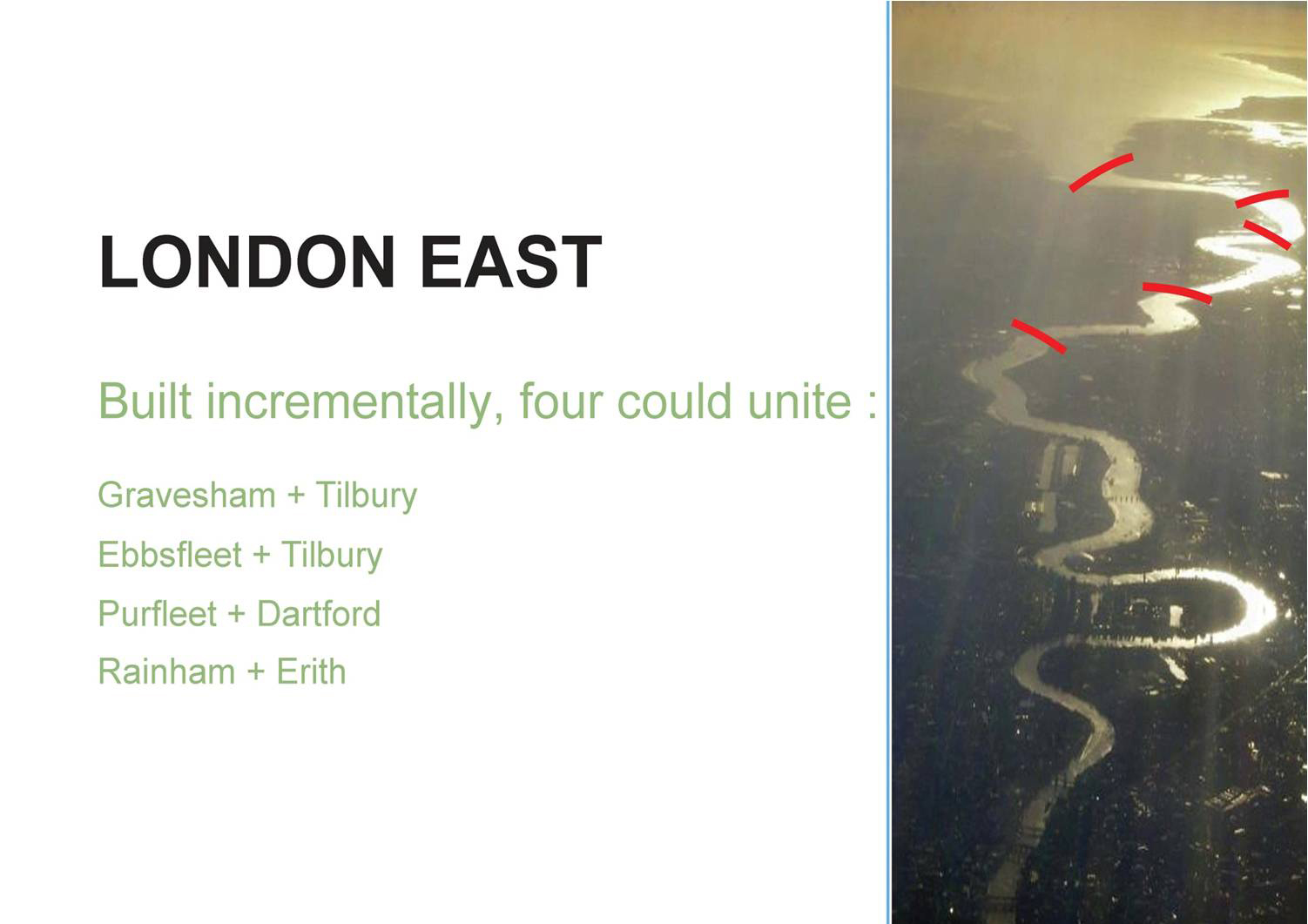 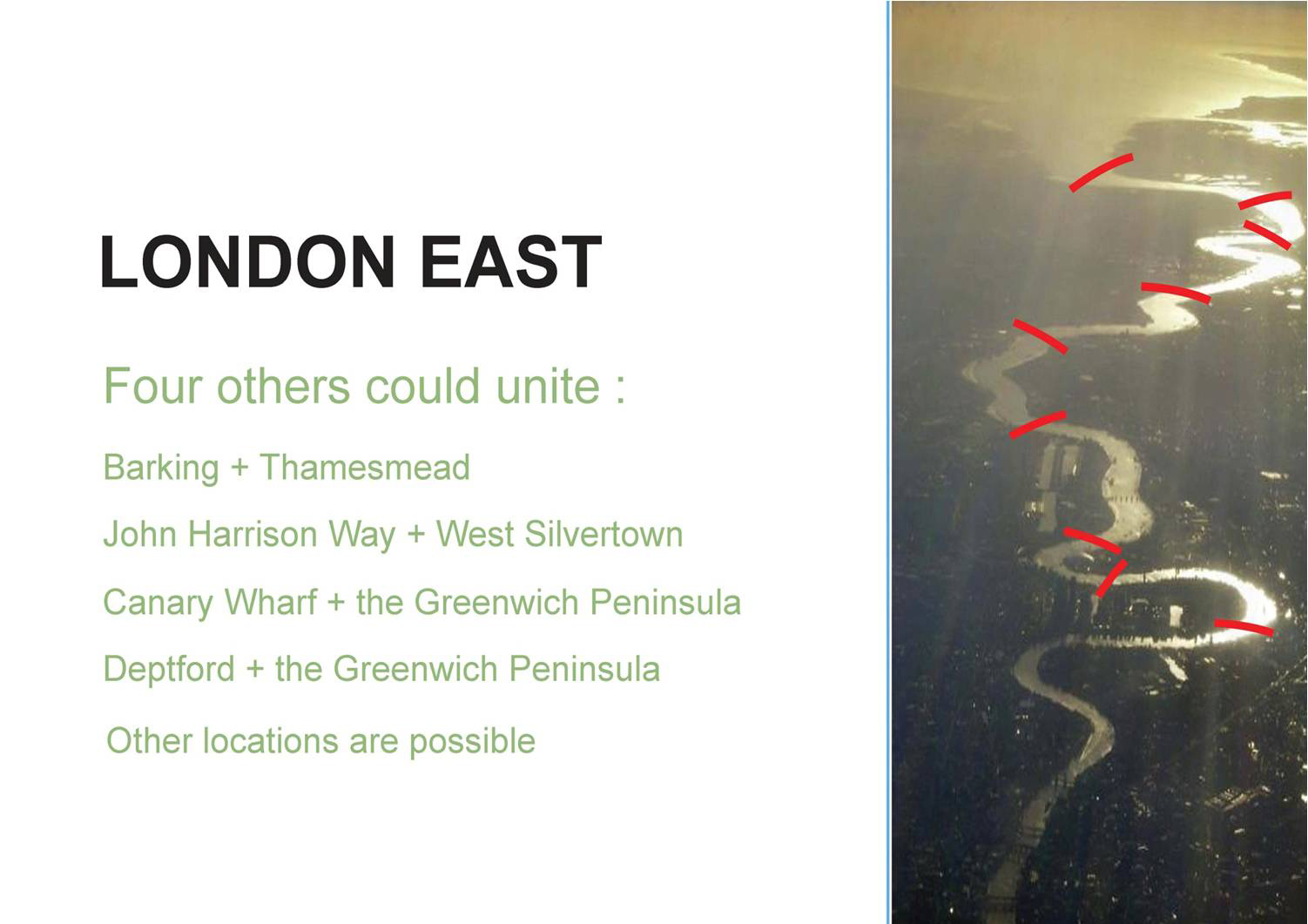 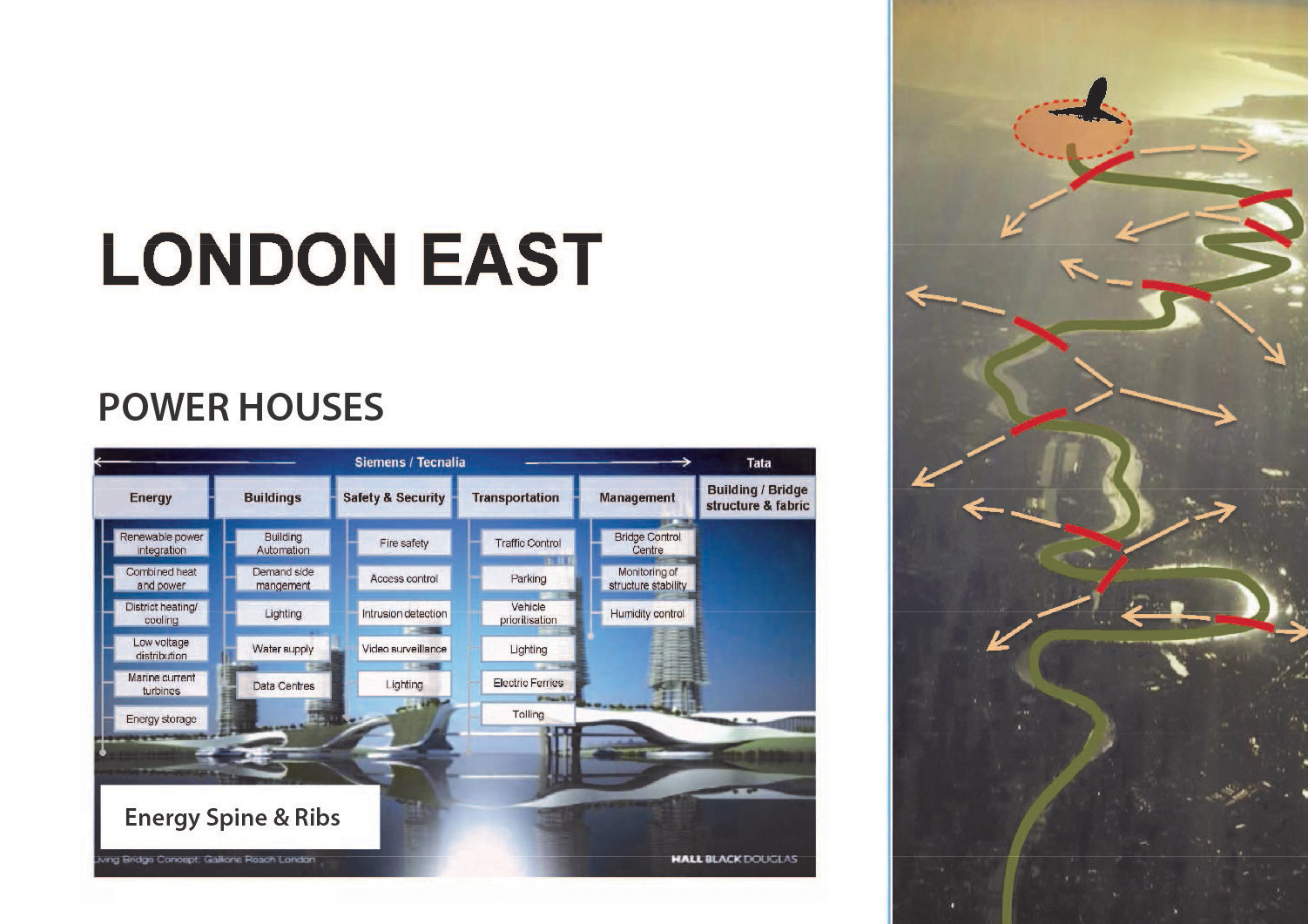 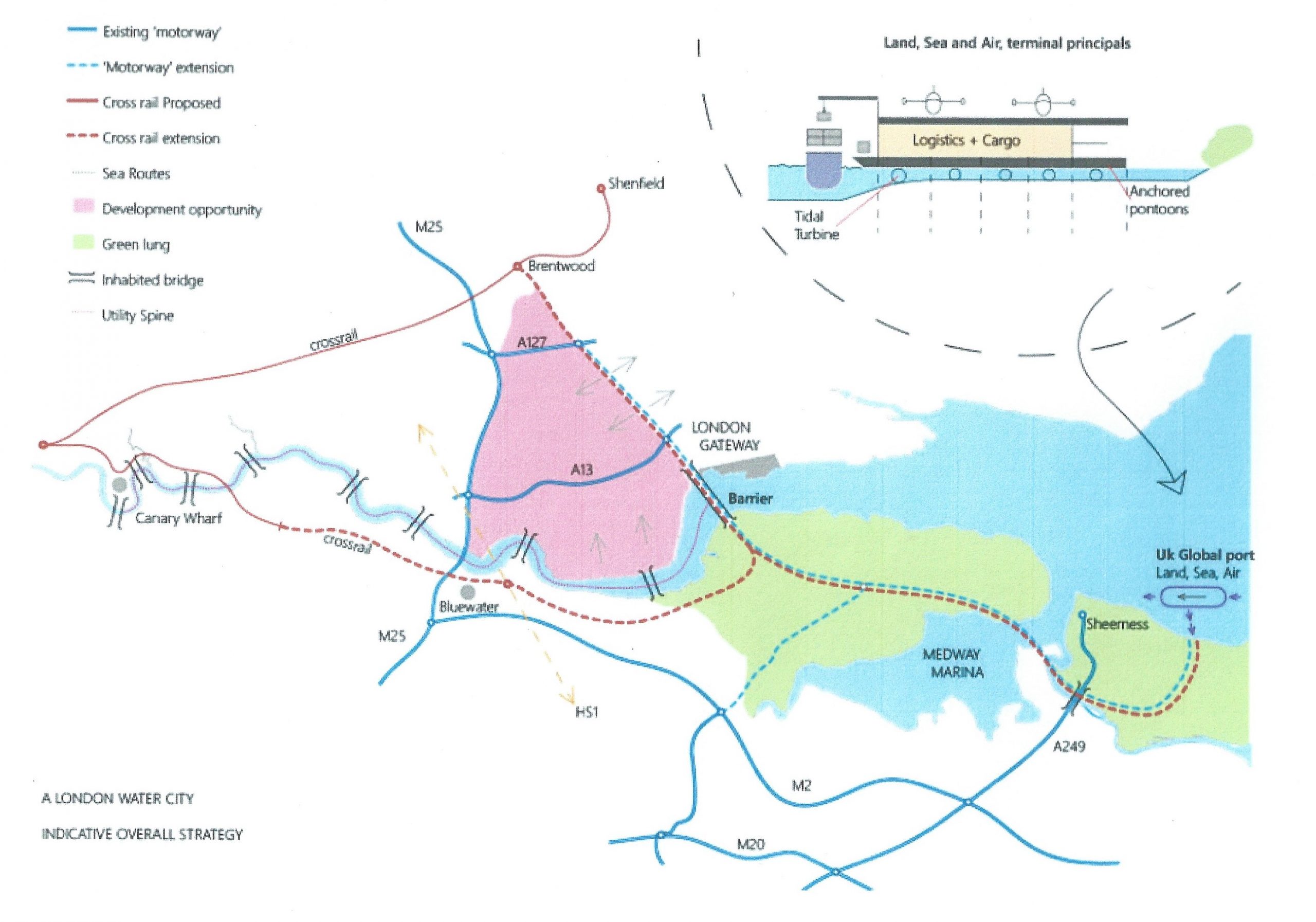 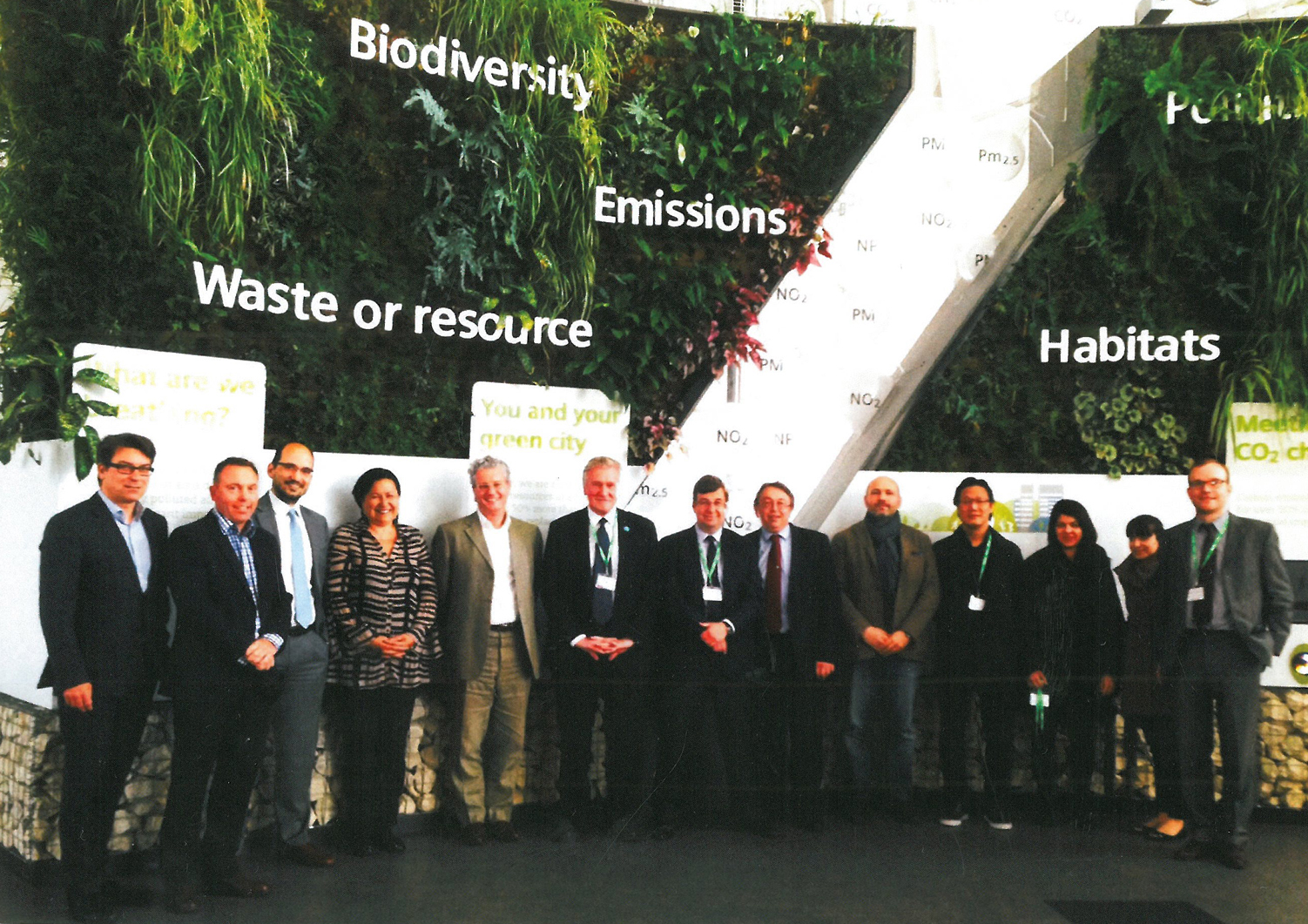